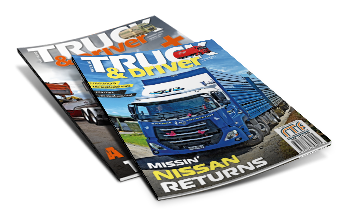 When UD Trucks (aka Nissan) dropped an 8x4 option from its New Zealand model lineup, it gave lots of customers no choice but to go elsewhere.

That, even in a small market like ours (or maybe moreso, because every sale counts), can be a persuasive way of influencing head office.

And so it’s apparently been with the missing UD/Nissan twin-steer, as Kiwi UD brand manager John Gerbich freely concedes: When the decision was made to exit the 470-horsepower/350 kilowatts 8x4 from the...

Listen to small businesses to get recovery right

Anyone who has attended our last few conferences would know that Cameron is one of ...


When Auckland towtruck business owner Evan Watson died 11 years ago, for wife Pam things could hardly have been worse.


With a history that dates all the way back to the 1930s, Matamata-based contractors J Swap’s family business is almost synonymous with the area as the Kaimai’s that shadow it - or maybe the Waio...


What a difference a year makes! This time 12 months ago, Recently Registered was all about the New Zealand new truck market’s just-completed recordbreaking year.


It amounts to, Aramex New Zealand CEO Scott Jenyns believes, one of the biggest (if not the biggest) rebranding exercises applied to a Kiwi commercial vehicle fleet.

Cost of living and inflation pressures are mounting

The cost of living and inflation are going up and this is creating a lot of pressure for everybody. With...

Safer speeds for Northland and north Auckland - have your say

People living in Northland and north Auckland are being encouraged to give their feedback on proposed safer speeds at schools...

Takitimu North Link project begins this weekend as construction gets underway on the first of eight bridges to be built.

On Friday 20 May, Waka Kotahi joined our partners Hōkai Nuku to bless the Arawhiti ki Ōkahu viaduct and artworks...

New Zealand is a step closer to a more resilient, competitive, and sustainable coastal shipping sector following the selection of...

A collaboration between some of the country’s leading manufacturing and transport companies will mean hundreds of plastic truck mudguards will...

Chair Lachie Johnstone has announced the CentrePort Board has appointed acting CEO Anthony Delaney as permanent Chief Executive Officer, with...