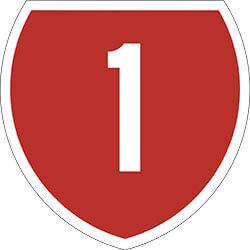 The first stage of improvements to implement a safer road layout through Kuku on State Highway 1 (SH1) between Ōtaki and Levin began this week. The work is scheduled to be completed ahead of the summer holidays.

Following community feedback on proposals for safety improvements along this stretch of road, Waka Kotahi NZ Transport Agency confirmed a programme of work planned to start in mid-2022.

“Safety is our top priority at Waka Kotahi. There is a history of serious crashes through this area, including the recent crash at Kuku where four people lost their lives,” Director of Regional Relationships Linda Stewart says.

“We have been investigating what safety improvements we can bring forward to make the road safer sooner. As a result, we have identified safety improvements for SH1 through Kuku that we can put in place before Christmas, with the remaining work to be completed next year.”

The new road layout will include wide painted centrelines which provide more separation between vehicles, and wider road shoulders. Flexible marker posts known as safe hit posts will be added to the centreline in some areas.

“Work will begin as soon as possible, in the first week of December, so that it can be complete before Christmas when holiday traffic ramps up,” Ms Stewart says.

The work will mean some disruption to road users, with some of the work to be carried out overnight. Stop-go traffic management will be in place at times during the work, between 9pm and 5am.

“We ask everyone to follow the temporary speed limits and drive safely through the work areas. Please allow extra time for your journeys particularly if you’re travelling at night,” Ms Stewart says.

Waka Kotahi will also consult the community on proposals for new safer speed limits on the road.

Construction of a new four-lane section of SH1 from Ōtaki to north of Levin is scheduled to start in 2025.

“We are investing in improvements to SH1 while we plan the new Ōtaki to north of Levin highway. Safety improvements and safer speed limits will help keep everyone on this road safer while we work to deliver the new highway within the next decade,” Ms Stewart says.