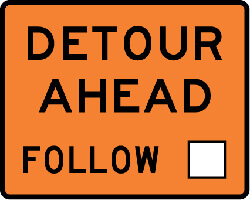 There is a date change for the overnight southbound road closures on State Highway 1/Waikato Expressway near Ohinewai next month.

The work to remove temporary barriers was originally scheduled 5-10 December and will now occur one week later - Sunday 12 and Friday 17 December.

Between 7pm and 7am all southbound traffic will be detoured from Rangiriri to the Glen Murray bridge, along Te Ohaki Road and across the Tainui Bridge at Huntly.

Vehicles without permits to use the detour (such as Overweight, 50MAX, HPMV and Over Dimension) may use State Highway 2 and State Highway 27, provided they hold the relevant permits.

All other heavy vehicles are not permitted to use the detour or alternative route and will need to plan their journeys for outside the closure times.