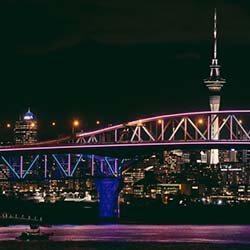 When high winds on the Auckland Harbour Bridge last September caused two trucks to topple over, one into a load-bearing strut, NIWA scientists began thinking about what role they could play in preventing it from happening again.

The incidents were described at the time as being caused by a freak wind gust of about 127km/h measured at the top of the bridge arch, and meant some of the bridge lanes had to be closed for more than two weeks for repairs, resulting in long delays for motorists

At the time, NIWA scientists had been operating a high-resolution weather forecasting model, known as the Auckland Model, for Emirates Team New Zealand in their ultimately successful defence of the America’s Cup.

This model was designed to accurately predict wind shifts in the Hauraki Gulf, so meteorologists Drs Richard Turner and Stuart Moore and modeller Amir Pirooz wondered how accurately it could also have predicted the high winds on the bridge.

The results showed that the Auckland Model, which forecasts weather on a much finer scale than other weather forecast models in New Zealand, was accurate on the timing and direction of the high winds but under-forecast the most extreme wind gusts observed on September 18.

"This is fairly typical model behaviour but what we wanted to know was whether the bridge structure itself had a hand in increasing the wind speeds to the point at which the trucks toppled over," Dr Turner said.

To do this the team needed to combine the high-resolution wind forecasts from the Auckland Model with some Computational Fluid Dynamics - a discipline that uses numerical analysis and data structures to study turbulence and fine scale flow around structures. This is the first time such detailed work has been carried out on wind effects on the harbour bridge and was done using the NIWA supercomputer.

What they found was that the bridge itself causes the wind to speed up at road level as well as between the bridge struts. The results showed that on September 18, 2020 modelled gust and mean speeds were increased by 10 - 15% close to the road surface with a forecast peak gust of 87km/h.

"The effects here are very localised and it is really important to understand these better because of the risk high wind events have to a range of assets such as transport and distribution networks and the potential knock-on to economic impacts," Dr Turner said.

Dr Moore said he wondered why there hadn’t been more incidents like the September one but concluded what happened may just be down to bad luck.

"I imagine that if those trucks hadn’t been in the position they were at that exact time, this wouldn’t have been such a big news event."

Internationally scientists are constructing vehicle overturning models to predict which types of trucks are likely to topple in particular weather conditions - something that could also be of benefit in New Zealand.

The NIWA team says gaining a better understanding of the detailed airflow patterns over the Auckland Harbour Bridge could help in developing a warning system to avoid the consequences of last September.

There is also further research on the horizon. The NIWA scientists now want to look at whether wind breaks erected on the sides of some bridges overseas would be helpful on the Auckland Harbour Bridge.

This opportunistic research was partly supported by the Resilience to Nature’s Challenge funded by the Ministry of Business, Innovation and Employment which includes a project that looks at Auckland’s vulnerability to natural hazards such as wind and rain in conjunction with WSP engineering and Auckland University.

"This was an interesting event because it lasted for just a short period of about 10 minutes when the wind really picked up suddenly and equally quickly died down again. It was very dramatic across large parts of the city."