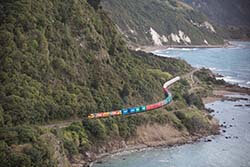 KiwiRail this week signed a $403 million contract that will update its locomotive fleet in the South Island.

“These are the latest-generation locomotives, which will set up KiwiRail’s South Island freight business for many decades ahead,” Miller says.

“Right now, our 65-strong South Island locomotive fleet has an average age of 47 years. Our machines have been used for 17 years, on average, beyond their economic life. The fact that some of our machines are closer to 60 than to 50 – means reliability is a real issue.

“Some of our machines have had three complete rebuilds over their lives, at significant expense. And we’ve still been using 1970s technology in those rebuilds.

The state-of-the-art, locomotives, which will be made in Spain, will begin arriving and enter service in New Zealand between early 2024 and 2026.

“The dual-cab locomotives Stadler Rail are building for us are state of the art,” says Miller.

“Not only will they meet the European Union world-leading emissions standards and see significant reduction in our fleet’s exhaust emissions, they will be fuel efficient and equipped with a range of onboard technologies to optimise energy use, including a system that can switch off the engine when the locomotive is idling.

“Each new locomotive will also be significantly more powerful and efficient than our current machines. This means there will be less need to use multiple locomotives to pull heavy trains – reducing fuel use and potentially reducing fleet CO2 emissions by 20 – 25 percent.

“It also means KiwiRail is future-proofed for the freight growth expected in the decades ahead by having locomotives that can pull larger trains.”