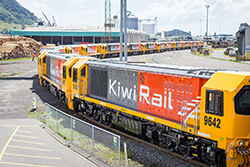 There has been a sudden change at the top of KiwiRail this week with group chief executive Greg Miller resigning, effective immediately.

Mr Miller advised that recent and sustained allegations in the media, while rejected by him, have become such a distraction that he has decided that it was in the best interest of him, his family and KiwiRail to step down, says KiwiRail Acting Chair Sue McCormack.

“I have accepted his resignation and on behalf of the Board, I thank him for his service to KiwiRail as Chair and subsequently as Group Chief Executive during a time of growth and unprecedented government support.

“The period included the revitalisation of rail in Northland, the re-opening of the Wairoa-Napier line, significant capital projects nationally, and the project to introduce two brand-new Interislander ferries.”

Mr Miller says he is proud to have led KiwiRail through a transformational period, including improved safety leadership.

“Historically the company has been under-resourced and, with government support, I have been redressing that deficit,” he says.

“The workshop rebuild programme including planned wagon assembly at Hilllside, and 67 new locomotives on order for the South Island, are all part of ensuring KiwiRail is on a strong footing for the future, and able to contribute to helping New Zealand reach its emissions reduction targets.

“I wish Team KiwiRail well as they deliver projects which will see rail enjoy a greater role in New Zealand’s transport sector in future.”

“The Board will immediately begin a search for a permanent replacement for Mr Miller but until then I know KiwiRail is in a safe and trusted pair of hands with Mr Moyle,” Ms McCormack says.