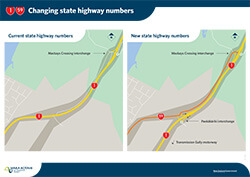 While an opening date has yet to be confirmed for the new Transmission Gully section of State Highway 1 north of Wellington, there is a date for the official change of highway designations.

The new Transmission Gully motorway will become SH1 when it opens.

“We’re doing a huge amount of work to prepare the state highway network for the opening of Transmission Gully – including additional CCTV, new signage, and encouraging good driving behaviour – and the SH59 renumbering is a key part of that,” says Mark Owen, regional maintenance and operations manager.

“Renumbering this section of state highway now allows us to be ready for opening, and for people to start getting used to the new number.”

State Highway signage throughout the region will be updated to reflect the change and Waka Kotahi is also working with map providers so that navigation systems can be updated.

“Being able to refer to SH59 will mean we can clearly communicate when there is an incident or crash, help people find their way around the network, and reinforce the understanding that the new SH1 via Transmission Gully will be the primary route in and out of the region,” says Mr Owen.

Despite the change in state highway number the route will remain the same and people will continue to use the road as normal, until Transmission Gully opens.

When the new motorway opens it will become SH1. In the meantime, the renumbering to SH59 will create a small break in SH1.