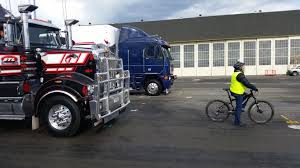 Video of Cyclist 'Instant Karma' Symbolic of a Wider Issue
Posted: 28-May-2018 |

Video footage of a cyclist receiving a dose of 'instant karma' after running a red light in Auckland is just one case in a wider epidemic on New Zealand roads.

In video captured on dashcam, the cyclist can be seen flirting with danger as he cycles ahead of the trucks on the corner of Tamaki Drive and Solent St.

Despite making it through the red light unharmed he was spotted by a policeman on the opposite side of the road. The cop did a U-turn in pursuit of the daredevil cyclist.

Director and truck driver for Geffen Transport, Roy van Geffen, caught the event on his dashcam and said he was "stoked the idiot cyclist" got a dose of karma.

"I see this all the time sadly. But I was just super stoked that the police were there this time. It was perfect timing."

Van Geffen was pleased with the outcome but he has a serious message for cyclists, saying that some of their behaviours are a massive risk to themselves and other road users.

"There's a dedicated cycle lane on that road but the pricks still want to ride on the road. With at least 1000 trucks up and down that road day and night, it's a dangerous situation for sure.

"They sit in front of your truck at the lights so you can't see them. Then the lights go green and you nearly hit them.

"On rural roads, they're even worse, usually riding two or three abreast and leaving no room for trucks to overtake meaning we have to slow a 44,000kg-55,000kg truck from 90km/h to 20km/h in time. When they're around a blind corner it's near impossible to stop in time.

"Red light running is a big one, they think the road rules don't apply to them. New Zealand roads aren't built for cyclists and trucks.

"I'm not saying truckies are perfect because there are some cowboys out there too."

The footage was released just one month after a truck driver was sentenced over the death of a cyclist in Napier. The driver was only asked to pay $1500 reparation to the family of the cyclist as he was deemed not to be at fault for the accident.

It goes to show that dangerous or negligent behaviour by cyclists such as that depicted in this video can result in tragedy.