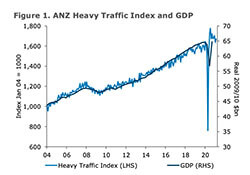 According to the February report, the economy is ‘back to trend’. The Light Traffic Index was unchanged in January, while the Heavy Traffic fell 3.8% month on month. A fall in heavy traffic isn’t the strongest start to the year, but in the bigger picture it’s just a return to trend. Both traffic indexes are higher than a year ago, but the overshoot is easing.

In broad terms, heavy traffic (trucks but also buses) primarily reflects the movement of goods, while light traffic is all about the movement of people. In normal times, light traffic provides a six-month lead on momentum in the economy, but at times of abrupt events such as seen in 2020, the Light Traffic Index will of course not see them coming, temporarily breaking the correlation.

Similarly, the Light Traffic Index was still 5.3% higher than a year ago in the final three months of the year, but the overshoot was as large as 8.8% back in November.

The recovery in the New Zealand economy has been remarkable, with fiscal and monetary policy proving highly effective. The medicine is causing a few side effects, with sectors such as housing and construction booming while tourism withers, reflecting that monetary policy in particular is a very blunt tool that can’t tailor its impact on different parts of the economy. But overall, it’s done its job of restoring economic momentum, albeit via increasing debt.

Part of the recent economic growth has been catch-up after the lockdowns, however, and that has naturally nearly run its course. We expect a few wobbles in the economy this year as that part of activity drops out and the real impact of the lost tourism earnings starts to be felt. But there’s a housing juggernaut that’s obscuring any nuance for now.