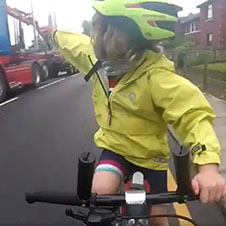 In stark contrast to an article in last week's Road Torque showing a cyclist running a red light in front of oncoming trucks, A viral video has emerged of showing how respectful truck drivers can be of others on the road.

The video shows a truck driver in Scotland cutting a wide berth around a family of cyclists, earning him the immediate approval of the family's young daughter.

The video demonstrates how the relationship between cyclists and truck drivers can operate, mutual respect and recognition.

Tom Jones, the patriarch of the bike-mad family, was enormously appreciative of the truckie's behaviour, saying on social media: "So often we see or share videos of awful driving around cyclists, so this textbook pass from an exceptionally patient & careful HGV driver for D&W Agri coming into Jedburgh deserves sharing"

"I told her, 'that lorry driver has been really kind, make sure you say thank you," Jones said.

Jones shared a video of the friendly act on their Twitter account on Sunday night, where it was viewed by thousands and also shared by many police accounts as affirmative examples of good behaviour on the road.