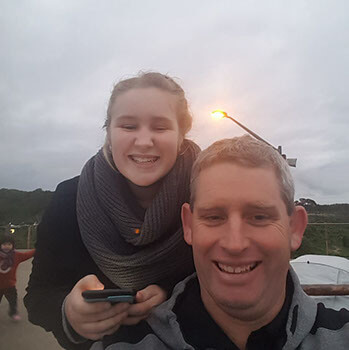 When did you get started in the road transport industry?

I've always been involved, my dad was a driver for a long time and he got me interested in driving trucks. I actually started driving properly when I was 18.

So you are mechanic now, you service only heavy vehicles?

Were you a driver before you became a mechanic?

Yes, I did, when I was 18 I started with a little local carrier in Hamilton but eventually moved on to Regal Haulage back when we had the R-Series Macks. I actually did my formal mechanic training in Regal's workshop. I owe them a lot they gave me my start in my driving career and in my mechanic career.

How long have you been a mechanic?

I was trying to work that out last night. About thirteen years. After I left Regal I had a small stint driving in America.

Oh really? How did you find that?

Totally different, I loved it but because I had family back here in NZ it was quite hard. It's just totally different to what we do over here. Everything is semi-trailers over there and big units. I did long-haul where we went from Jacksonville, Florida to California every week.

How is it different to driving here?

A lot of straight roads, a lot of sitting there staring. I wouldn't really call it driving, not like we do here. It's a lot more interesting driving on NZ roads.

Which routes did you drive here?

Everywhere really. Once my son was born I just did Hamilton to Auckland. Before that, it wasn't unusual for me to be staying away in the South Island. I didn't really like going down there, the ferry was just a killer. It's just so boring going over on the ferry. I didn't really have a favourite I just didn't like going down there. Happy to go to Wellington and happy to go up North though.

How did you end up being a mechanic?

God, people will shoot me for this. I was sitting in the cab thinking god I don't want to be a truck driver forever. I was actually 2-minute relief at Regal if anyone was sick or away I would go and do their runs for them. I was driving everyone's truck. I was also going to relieve in the workshop, I actually really liked it there and thought 'hey I could do this'. It was easier for Regal to keep me as a driver than as a mechanic, so I ended up leaving. I was going to apply for a job at Truck Stops doing a kind of handyman roles in their workshop to get my foot in the door. I rung Regal for a reference and talked to Scott there and told him what I was wanting to do and he said 'well why don't you come do that for us?

I thought 'wow' that's an opportunity to work with who you know. So I went there and got my trade certificate and the rest is history.

I owe a lot to Regal, they trained me as a driver and as a mechanic, they are really good people and gave me a leg up.

It wasn't easy though, I had some mechanical knowledge that I've had throughout my life. It wasn't easy though, I always had a little devil on my shoulder urging me to go and drive again. Especially if you are having a sh***y day in the workshop you think 'I should've stayed driving'. But you know I finish up at five and go home to my family while the driving takes a lot more time.

Yeah, it must be a lot harder driving long hours when you have a family at home?

It is yeah. My son is actually driving now himself. He has followed my footsteps a little bit! Used to take him in the truck all the time when he was little. When I was doing the Hamilton to Auckland run, he was little, my wife used to come down and help me unload. Used to put him in his pushchair in the smoko room, he'd be fast asleep at 9 or 10 at night and we'd be un loading the truck.

He's been around the transport industry as long as he has been alive.

And yourself? Have you been around the transport industry your whole life?

Yea I have. I used to go out with my dad in the truck all the time. When I was growing up dad worked for Otway for Neil Otway way back when McDonald's first was taking up. I remember riding along with him back in the day, amazing man, a real legend. That's my earliest memories. Dad then moved on to the milk tankers. At the time it was Waikato Dairy, its Fonterra now. He was a serviceman for Waikato Dairy for a while then moved out driving again. I'm a bit like him, doing different things.

So, how has the industry changed since you started?

Its changed heaps, both industries. If you look at both, there is a shortage of good quality guys who want to get out of bed and actually do the job. There are a lot of guys that want to get up and drive down the road or come into the workshop but they just don't have the passion. You might interview 10 guys and find 1 that actually have the drive and the passion to do it. It's really sad and frustrating.

We weren't angels when we were driving, far from it, but now unless its an auto they don't know how to drive it, they just don't want to know about it.

What advice would you give to a young person wanting to enter the industry?

Start at the bottom, and be prepared to do the hard yards. Don't be one of these guys that just want to get in the big gear and drive the big flash stuff straight away. Start at the bottom and prove yourself. There were two guys that taught me who had been drivers for ages, I listened to everything they had to say. Young people come in and think they know better or that Google knows better. They are going about it the wrong way. The older guys are the ones we need to listen to. You learn something new every day, even I am still learning.

True, so finally, what did you drive and what was your favourite?

My favourite with Regal was, we drove all sorts, but my favourite was the K100 Kenworth with the Detroit in it. It was probably my favourite. But I have been very fortunate, my boss Susan has got a 143 Scania 450, I always wanted to have one. Never through my driving career did that pop-up, we actually got one here as the workshop truck that we restored it completely, pretty much our pride and joy.