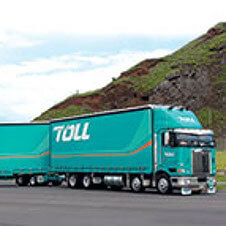 Toll Networks (NZ) Limited has been fined after one worker was crushed and killed by falling pallets.

The major freight distribution and logistics company were ordered to pay $506,300 at the Auckland District Court on the 25th of May.

The payout included $118,020 (plus costs) for damages including emotional harm and consequential loss. Toll had already paid out $105,000, to the victim's family.

The company was charged under the Health and Safety at Work Act with failing to ensure the health and safety of workers. The maximum penalty is a $1.5 million fine.

The man died at Toll's Onehunga site in September 2016.

He was standing beside a forklift as pallets were being relocated from a train wagon when the pallets fell as the driver reversed. The victim was crushed by the falling pallets and died at the scene.

Following the incident Worksafe NZ investigated. They found out that Toll hadn't identified the risk of a pedestrian being hit by freight falling from forklift prongs.

The investigation team also found that Toll's pedestrian safety system relied primarily on administrative controls that were ambiguous and contradictory.

WorkSafe investigations and specialist services deputy general manager Simon Humphries said pedestrians and moving plant need to be segregated to avoid tragic incidents such as this.

"This was a much-loved father and grandfather whose death would not have occurred if Toll had effective controls in place.

"Administrative controls like rules and procedures are simply not enough, pedestrians need to be segregated from forklift activity."

WorkSafe considered that workplaces such as this are constantly changing with many moving vehicles, plant and personnel, but reinforced that more needed to be done to keep workers safe.