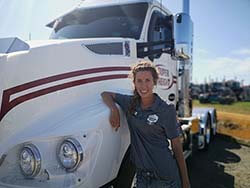 With 280 Trucks on display, nearly 7000 public attendees, 54 or so sponsors and raising over $68,000 for charity, it's fair to say that the Bombay Truck Show was EPIC.

N&J Wood Ltd, together with the Bombay Rugby Club, TDM and Superfreight, organised the very first Bombay Truck Show. It was an event that showcased some of the industries finest heavy metal from bygone years gone up to the recently released, trucking industry suppliers and providers, plenty of food stalls, a bar, a live music stage and what's more gave 100% (that's 100 per cent) of its proceeds to charity and local community groups.

"We are thrilled that so many people are jumping at the chance to get right behind us and donate goods or money to help us do two things….Organise the best truck show ever, and give a huge amount of money to charity!!" Says Marieka Morcombe event organiser.

"It's hard to put the event into words. Just a simply amazing day. I think I ran on pure adrenalin from 4am till 4pm when I got to finally announce that 280 Trucks, nearly 7000 public, 54 odd sponsors along with Todd, Mack, Lance and myself managed to make over $68,000 for charity."

"Being our first show, it was always going to be a bit of a test. We didn't know how the public would flow so we took a guess and got pretty close! The committee will debrief soon, a few small changes next time will be all that's needed to be even better next time."
"Our 8 amazing judges did a fantastic job and feedback from many people says they nailed the prize allocation. As usual though, it would be nice to reward even more people for their hard work. It certainly didn't go unnoticed and we just loved that there was a stack of trucks there that either hadn't seen the light of day for many years or were brand new on the road. One truck had less than 20km on the clock! Oldest truck was over 80 years old!"

"The amount of volunteers that gave huge amounts of themselves over the whole day was really just outstanding for me. A lot of people put in a whole days worth of time just helping out. The public were also very generous, we were handed a lot of money and told to keep the change."

"The people that were left after prizegiving let their hair down nicely. It turned into a real celebration of a massive day. Our incredible one-man band Dave Alley sadly lost his voice, but this only added to the night in the end. There would have been a dozen other people behind that microphone during the night and some were absolutely wild!"

"Massive thanks to everyone who lent a hand on the day, as a committee of four, we couldn't have achieved the success we did without a lot of extra help."