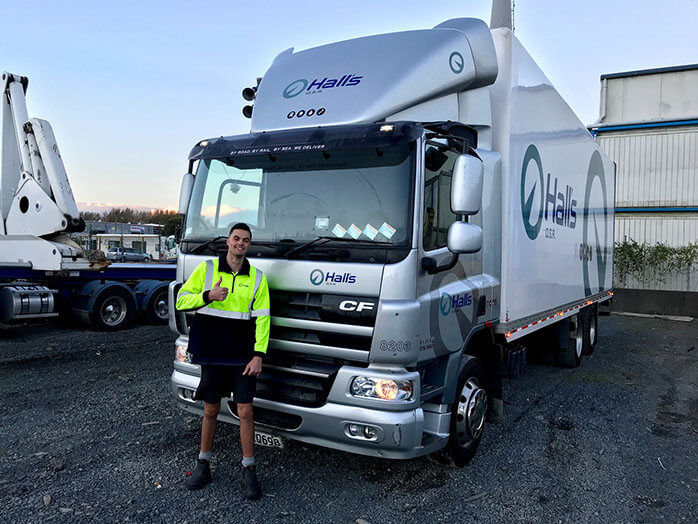 Teenage Truckie leads the way for a new Generation
Posted: 13-May-2018 |

Not everybody is cut from the same cloth and Harrison Wells was definitely swimming against the tide when he attended Auckland Grammar School.

Now he is driving trucks for Halls Transport and loving it, having started work for the nationwide company straight after he had finished his sixth form (Year 12) exams.

"It's a great industry to be in," said Wells. "I like the practical aspect of it. Much better than academic stuff."

"It got to the stage where school wasn't for me," said Wells. "The third and fourth form was okay, but I hated the fifth and sixth form."

He admits he was regularly late for school – on purpose – and wasn't a fan of the Cambridge senior school exams that Auckland Grammar steers its pupils towards.

To give the school its due he was involved in courses that offered alternative careers and gained a forklift license and barista skills.

"There was also information about the trucking and logistics industry which looked interesting. I kept telling my parents I wanted to leave school, but they said I had to get a job."

With encouragement from careers teacher Graeme Edwards, Wells put together a C.V. and approached David Aitken, the CEO of the National Road Carriers Association.

He sent the CV to several of the big companies in the Auckland area. The end result was Harrison found himself at Halls' Takanini depot one Friday afternoon after school being interviewed by Grant Madill, Halls Executive Director.

"I started work the Monday after I finished my exams," said Harrison. "I've loved it from day one."

"I wouldn't be here without Graeme Edwards. David Aitken and Grant Madill have both been awesome too."

In the last 18 months he has progressed to a class four license – for any vehicle over 18,000 kgs -which he gained a few weeks ago. He is currently driving a 400 horsepower, 8-wheeler Isuzu, "which can test your skills," making deliveries all around the greater Auckland area.

Harrison has just turned 19 years old. He admits he has always been into anything with an engine "since I was a little kid. Cars trucks, anything I could jump into the seat and blow the horn."

Harrison spent the first three months at Halls picking and packing in the warehouse and loading trucks, learning about the logistics of the industry.

In March last year he started making van deliveries in Auckland, having progressed through his standard driver's license as quickly as possible.

"I sat my learner's after school on my 16th birthday and got my restricted as soon as I could." And he progressed to his full license in the minimum time allowed.

In June last year he gained his class 2 license and was soon driving nine tonners around Auckland.

All his training has been done by Halls' certified trainers on site. "I get to check in with them and get tips and advice whenever I need to." The training has also included block courses of unit standards commensurate with the license grade.

Wells already has his sights set on a class five license, which he believes might be possible by the end of the year, "if I keep doing what I've done so far and not make any mistakes."

A usual day can see Harrison starting work about 6am, with a normal working day varying between 10 to 12 hours delivering chilled and frozen goods to supermarkets, restaurants and cafes.

The days can be long, but the work is rewarding and the wages are enticing for somebody starting out in the industry.

"It's pretty intensive and keeps you on your toes," said Wells. The most drops he has done in a single day is 67!

Harrison enjoys the variety the job offers, meeting new people and the opportunity to get out on the road and drive modern machinery.

And he can see the future potential and opportunities available in an expanding road freight transport industry to meet the needs of a growing population.