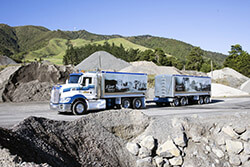 With a history that dates all the way back to the 1930s, Matamata-based contractors J Swap’s family business is almost synonymous with the area as the Kaimai’s that shadow it - or maybe the Waiomou Stream where the business all began.

Even with well-over over a century of combined time within J Swap, and with their children and grandchildren working there, Directors David and Lewis Swap are still the ‘dynamic duo’ of the business. They seem as passionate about the way the business now as the day they first began and can talk the hind legs off a donkey - or the horse their father Joseph ‘Joe’ Swap used to when dredging river gravel from the stream that bordered the family’s dairy farm at Te Poi in 1934.

In the late ’40s Swap’s diversified into civil trenching and drainage works that included the project to widen the Kaimai road, and set the foundations for the company’s future. David joined the Swap company in ‘58, directly upon leaving school. He drove trucks and worked beside his father on both the Civil projects and on the farm. Lewis joined a decade later in ‘69, having travelled a bit and serving time as a diesel apprenticeship for Gough, Gough and Hamer. From there on in the company began to grow in both size and operations.

From drainage and infrastructure the Swaps grew the Civil side of the business before getting into quarries and then land and farming. “We’ve got 1200 cattle, 400 breeding cows and 12,000 sheep, we’re the biggest sheep farmer in this district now.” says David.

This spawned an idea of importing palm kernel to use as a stockfood for dairy cows and along with it a carting fleet.

They say that currently they have around 504 staff on the payroll plus another 150 sub-contractors and some fencing crews out there. “We’ve got about 5,800 clients and 4,000 suppliers, it’s a lot of people to deal with.” Lewis adds.

However, it’s not just employment, the Swaps continually support Matamata and the surrounding area.