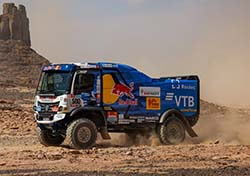 The KAMAZ-master team swept the top four places of the Truck category at the 2022 Dakar Rally, held in the dunes, canyons and mountains of Saudi Arabia for the third time.

Team-mate Eduard Nikolaev briefly led the rally after the short preliminary stage on January 1 but a win in the first full stage moved Sotnikov into the lead he never lost. By winning the short final stage alongside the Red Sea, Sotnikov sealed a winning margin of 9m 58s over Nikolaev.

It was a tight battle for the podium with Anton Shibalov taking third place only 1m 13secs behind Nikolaev. In the later days of the rally Andrey Karginov recovered from an earlier loss of time to finish fourth.