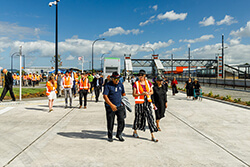 A plan that proposes an $8 billion investment in the Waikato region’s land transport system has today been signed off for public consultation.

Developed by the Regional Transport Committee, the plan sets out how the region’s land transport system will be developed over the next 30 years.

“This plan will position the region well to make the transformative changes that are needed to provide for our growing and diverse communities,” said Waikato regional councillor and committee chair Hugh Vercoe.

“Ultimately, the committee wants to make sure our transport system is as sustainable, safe and accessible as possible, where no-one is killed or seriously injured,” Cr Vercoe said.

“We’ve signalled a 34 per cent increase in investment from our last plan in 2018, which includes a huge leap in funding for walking and cycling activities, as well as big increases for road maintenance.

“Through this plan we’ve also looked at protecting the efficiency and resilience of our strategic transport corridors, because they play such a pivotal role in the upper North Island and national economic freight and logistics system.”

Cr Vercoe said the plan prioritises “providing for the access and mobility needs of our communities, including facilitating a future integrated land use and transport system to provide for our growing Hamilton-Waikato metro spatial area”.

He said the committee had also looked at ways to meet climate change responsibilities, including facilitating the transformation to an energy efficient and low carbon transport future.

Significant projects in the draft plan include:

seeing the completion of the Waikato Expressway in this RLTP term and advocating for its extension from Cambridge to Piarere, as well as other state highway resilience projects such as SH1 Bulli Point at Taupō and the Awakino Gorge on SH3

significant road safety improvements through the Road to Zero Programme around the region, with a package of works to address speed management around schools

funding for operating and enhancing the Te Huia passenger rail service between Waikato and Auckland.

Cr Vercoe said, “As a committee we’ve worked closely with key stakeholders to determine the transport objectives and priorities and to identify significant transport activities that we are seeking Government investment in.

“All this will move us closer to achieving our vision of an integrated, safe and resilient transport system that delivers on the wellbeings of our diverse Waikato communities.”

Consultation on the draft plan opens on Friday (19 February) and closes at 11.59pm on Sunday, 21 March. To read the draft plan and make a submission, visit waikatoregion.govt.nz/rltp.