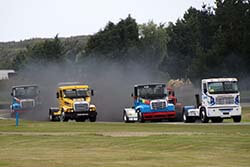 The opening round of the 2022 New Zealand Super Truck Championship is going ahead this weekend at Levels Raceway near Timaru, but as a non-spectator event.

The move to the Covid-19 Red Traffic Light setting earlier this week has seen the South Canterbury Car Club make the call to proceed with its “Thunder Down Under” event.

While spectators are not permitted a free livestream of the racing will be available produced by The Pits Media and sponsored by Premier Insulation.

A four-round national championship has been scheduled for the Super Trucks with a quick-fire calendar running through till early April.

The Timaru meeting will be the race debut of a new Kenworth T409 to be raced by Wellington’s Shane Gray.

The truck is a new build from Force Industries in Taranaki and will see Gray returning to the grid after four seasons away from the sport when he campaigned an older Kenworth.

Gray says the Kenworth has been built to be an outright contender and his goal is to be at the front of the field challenging defending Super Truck champion Troy Wheeler.

This weekend’s Timaru meeting is billed as “Thunder Down Under” and also includes the crowd pleasing Mainland Muscle Cars, OSCA Series and Pre-65s on the race programme.

At this stage, Teretonga Park at Invercargill hosts the second round of Super Truck title action on March 18-20 with another South Island round at Ruapuna near Christchurch on March 25-27.

The following weekend, April 1-3, the final round is at Manfeild Circuit Chris Amon in Feilding.