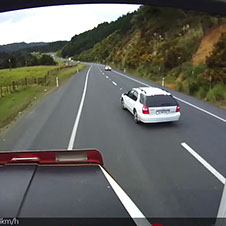 Dashcam footage released by a kiwi truck driver has gone viral on social media this week amassing over 350,000 views and 3500 shares since last Friday.

The video, shot by Michael Maunder of Holmes Group in Northland (and edited by his son Thomas), contains a series of clips highlighting some poor driving habits of other motorists on the road and has got people talking, both truck drivers and public alike.

In the many clips seen in the five-minute-long video, drivers can be seen dangerously overtaking and cutting off Maunder's truck forcing the driver to take evasive action. Many near misses are seen in the footage, and by some miracle, no crashes.

Many commenters on the video have responded in support of the truck driver, many were unaware of what truckies deal with on a daily basis and were surprised. The response from drivers was more apathetic, "just another day on the road" wrote one driver. All commenters lamented the lengths people go to just to get around a truck.

Maunder was more sympathetic towards the other motorists than some of the commenters on the post.

"I think that most of those people are good drivers, they're just making stupid decisions and not thinking of the consequences.

"The disturbing thing about it is that the drivers are so used to it, most of the comments on the video from drivers are along the lines of 'its just another day in the office'. If I am seeing these things all the time, and they are too, it must be an epidemic out there. It's not like we are above it either, truck drivers make mistakes too, but some of these aren't mistakes. A lot of the time I think its people who know the road and just take unnecessary risks." says Maunder.