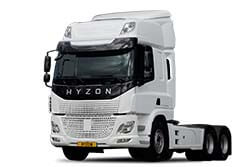 The Hyzon fuel-cell electric heavy truck marque set to arrive on New Zealand roads in 2022 is reporting 87 deliveries in 2021. The number represents global commercial sales agreements but does not include trial leases.

The Hyzon vehicles delivered were heavy duty fuel cell truck models ranging in weight from 18 to 49 metric tonnes. They are deployed in various roles including refuse collection with a leading European supplier of refuse collection vehicles, sewer cleaning with European municipalities, and heavy-duty use cases such as steel coil haulage with the largest steel company in the world.

The eight FCEV dump trucks deployed under trial leases in Foshan, a UN Hydrogen Demonstration City in China, are not included in the 87 vehicle deliveries.

Hyzon anticipates its 2021 financial results will reflect both lower average selling price per vehicle due to product mix and multi-year revenue recognition for the majority of sales, which will result in materially lower than forecast revenues and margins.

"Thank you to all of our customers, employees, suppliers, shareholders and supporters who helped us battle the global supply chain headwinds and better the expectations for 2021 deliveries,” says Hyzon CEO and co-founder Craig Knight.

“Each truck Hyzon supplies around the world is another step towards decarbonizing commercial mobility. Hyzon aims to make 2022 a watershed year for hydrogen in heavy mobility."

New Zealand plays a significant role in Hyzon’s 2022 plans with a fleet of 20 Hyzon FCEV trucks scheduled to begin appearing on Kiwi roads later this year.

The trucks are part of a zero-emissions project involving Hiringa Refuelling and Waitomo Group that will establish hydrogen refuelling stations in Auckland, Hamilton, Tauranga and Palmerston North this year.

The trucks will be leased by TR Group to a number of leading transport operators by way of a fully maintained operating lease (FMOL) – with fuel included.

The Hyzon FCEV is based on a NZ-spec DAF CF 6x4 with 600hp output. They will be capable of about 600km between refuelling stops.