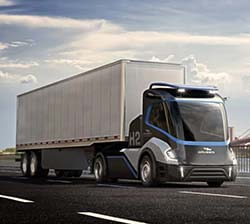 Gaussin to expand EVs and FCEVs production to Australia and NZ with Nexport
Posted: 29-Sep-2021 |

French special vehicle manufacturer Gaussin is entering a strategic partnership with Nexport to distribute its range of electric and hydrogen vehicles in Australia and New Zealand.

The joint venture will see an investment of 10 million euros (AUD$16 million) to locally assemble Gaussin vehicles in Australia and New Zealand.

This further strengthens Nexport’s capability and positions the company to procure, assemble and supply a range of zero-emission vehicles. Gaussin has a portfolio of zero-emission prime movers, airport transporters and refuellers, electric buses, hydrogen-powered generators, and a range of other vehicles. Late last year Gaussin announced a cooperation with Plug Power to bring hydrogen fuel cell logistics vehicles to market.

Nexport already has an agreement with the electric bus partnership between Alexander Dennis Limited (ADL) and BYD that announced its expansion to Australia with the aid of Nexport just two months ago.

Australia has a large mining industry that is particularly well-poised to make use of zero-emission vehicles. As one can imagine, underground operations are best carried out by vehicles that do not have emissions. Australia is the world’s second-largest exporter of coal, but also a big producer of cobalt, lithium, and nickel.  Australian fast-charger specialist Tritium has also redesigned a DC fast charger for mining operations and last month two Australian manufacturing and technology companies Ampcontrol and PPK Mining Equipment announced they were set to deliver a range of new battery-electric vehicle solutions for underground mining applications.