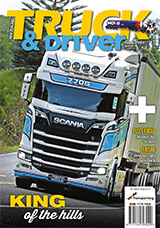 Tauranga’s Brett Marsh Transport provided its first 770 S – and the first on the road in New Zealand - for the February Giti Tyres Big Test. The 770 S is the world’s most powerful series production truck, and NZ T&Ds feature is the world’s first test of the 770 S in the big cab `23’ configuration.

The February issue also looks inside the operation of Christchurch-based Burnell & Son Transport in the Teletrac Navman Fleet Focus.

In a special feature NZ T&D editor Wayne Munro signs off after 22 years in the driver’s seat of the magazine and the popular Old Iron section sees historian Gavin Abbot recall the history of the REO marque and its connection to the New Zealand transport industry.

CrediFlex Recently Registered takes a deep dive into 2021’s strong recovery in the new truck market and the late-year sales surge that carried FUSO to the number one spot, dislodging Isuzu from 21 years of market leadership.