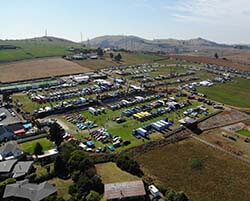 Among the many events brought to a halt by New Zealand’s shift into the Covid-19 Red Traffic Light setting is next month’s Bombay Truck Show.

Organisers of the February 12 event sponsored by Allied Petroleum and TransFleet Trailers announced the postponement of the truck show yesterday. A new date is being sought and will be advised soon.

Planning had been well advanced for the show to go ahead under the Orange traffic light guidelines with exhibitor spaces being sold out before the end of 2021 and more than 300 trucks registered for the UDC Show and Shine competition.

“We are extremely disappointed to have been only 20 days out from the show, with so much of the work done, only to have the rug pulled out from under us,” says show director Marieka Morcombe.

“We looked at a few alternatives but with only 100 people allowed there is no choice other than to postpone the show.”

Marieka says all exhibitors and entries in the Show and Shine are being offered the options of either a full refund, an 80% refund that also reserves a place in the next show or for show organisers to donate 50% of the registration to the named 2022 charities (Franklin Hospice, Leukaemia Blood Cancer NZ and the Bombay Rugby Club) and carry over their registration.

“So far the response has been overwhelmingly for the third option,” Marieka says.

“If there is any silver lining the next show is ready to go.

“We will talk to the land owners and the most likely options are for a show towards the end of this year, or in February 2023. We’ll announce the new date as soon as possible.”

The inaugural Bombay Truck Show in February 2020 had raised more than $68,000 for charity.