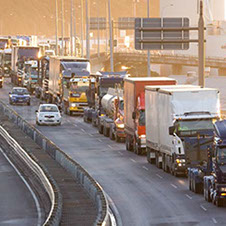 Linguistics plays an astonishing part in generating and maintaining the image of an industry. But can this image change?

Dennis Robertson of the Road Transport Association suggests the word 'truckie' is harmful to the industry and that 'professional driver' should be the go-to term when referring to an individual that drives a truck for a living. But many aren't so sure.

'Truckie' is an abbreviated form of truck driver first used in Australia and imported here along with tradie, sparkie and many other ie's.

"Truckie may sound matey or blokey, but 'professional driver' reflects the serious responsibility of the job," says Robertson.

"These professional drivers have to undergo extensive training and acquire highly developed skills, which need to be rigorously maintained."

Though Robertson's heart is surely in the right place, many believe that this is not the right way to go about things.

What this really boils down to is all about image. What do the public think, what image is produced in their mind's eye when they hear the word 'truckie'.

The traditional stereotypical image of a truck driver is male, overweight, and unsophisticated, and within the context of this article, it is assumed that this is encompassed within the word 'truckie'.

However, is this really the image that is conveyed by the word in this day and age? Many do not think so.

Logging driver Bridget Scott told the Herald she likes being called a truckie rather than a professional driver.

She said the professional driver didn't accurately reflect her job because it could also include bus and taxi drivers and couriers.

This is an important point, empowering truck drivers requires acknowledgement that what they do is different from other kinds of transport operators.

Truckie defines a person that operates a heavy vehicle transporting heavy loads. A 'truckie' or truck driver is synonymous with a road transport professional.

Finally, is it really the case that 'truckie' conjures up the dated stereotypical image mentioned before?

That is really for the public to know, and for someone to find out. However, after multiple media campaigns showing the diversity amongst drivers, the name still sticks. These days, a truckie could be anyone.

The image behind the word is ever-changing, and changing for the better. The truck driving profession does not require a rebrand it needs to continue to produce positive and diverse images that represent the reality of being a truckie.