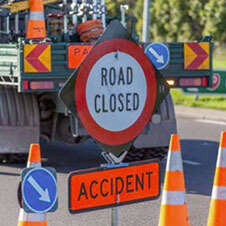 Another Truckie Traumatized, Another Motorist at Fault
Posted: 28-May-2018 |

A truck driver has been left traumatized following a fatal accident involving a foreign national on the Hawke's Bay Expressway. The incident comes at a time when being safe around trucks has been forced into public awareness.

The incident occurred when the driver of a black Suzuki crossed the centreline into the path of a McCarthy Transport logging truck between Links Rd and Evenden Rd last Thursday morning. The driver of the Suzuki was killed instantly upon impact.

The incident comes just one week after a video was posted on Facebook showing the realities of what a truck driver sees while on the job.

"I think that most of those people are good drivers, they're just making stupid decisions and not thinking of the consequences...I am seeing these things all the time, and [others] are too, it must be an epidemic out there," the maker of the video told Road Torque.

The video was featured on TV Three's 'The Project' last week followed by a discussion by the video maker's colleague Murray Croft. See video here.

"Slow down and grow old" was Crofty's message to viewers. "Every accident has a ripple effect hurting a number of families."

This is the reality of such crashes, it does not just affect the deceased. It affects their family, it affects the driver, his family and his employer as well. The damage is severe and wide reaching.

The mentality of 'not if but when' is becoming more and more a reality for on-the-job truck drivers and incidents like this reinforce the vital importance of being safe around heavy vehicles.

This case was the worst possible outcome for both parties involved, despite the best efforts of the truck driver from preventing it from happening.

"It was a significant-impact crash ... but nothing unusual to other high-impact fatal crashes," Ormerod said.

The driver was left uninjured but was impacted psychologically from the incident.

"A car has come out of a line of traffic, crossed the centre line and run into the front of him as he was braking heavily to attempt to avoid the accident," McCarthy Transport managing director Mark McCarthy said. "He couldn't take any more evasive action than he took."