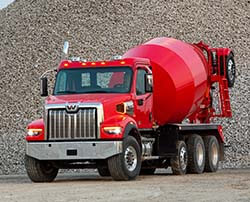 Daimler Trucks North America (DTNA) unveiled the brand new Western Star 47X in the United States. After launching the 49X a year ago, the 47X is the second truck in Western Star’s entirely new X-Series platform.

As the official distributor of Western Star Trucks across Australia and New Zealand, Penske is working closely with DTNA in the adaptation of the new X-Series to local on- and off-highway markets.

Building on a long legacy of manufacturing durable, hard-working trucks, the new platform combines the tough American heritage that Australian and New Zealand customers have come to expect with the latest in engineering advancements.

“We are thrilled to be launching the new Western Star range in late 2022 in Australia, and shortly after that in New Zealand.

“Boasting lighter yet tougher cabin frames and steel-reinforced cabins, and with features including wrap-around dashboards, our customers will surely be impressed when they see the trucks in person and step foot into the cabin.

“We will continue to work with our dealer network to ensure the highest level of support is delivered to our existing and our new customers.”

With a standard 111.6" BBC, the 47X is well suited to regions or applications that require a shorter overall vehicle length, such as drywall trucks, and for those that need to meet federal or local bridge law requirements, such as mixers or super dumps, an optional 110.8" BBC. With the shorter hood and a wheel cut up to 50 degrees, the 47X further optimizes maneuverability for work on construction sites or operation in congested urban environments.

With the X-Series, DTNA engineers have evolved that legacy to consider the needs of today’s customers and have completely reimagined the modern vocational truck.

“A key priority was to consider how to reduce mass without compromising strength,” said Tracy Mack-Askew, chief engineer of chassis, propulsion and vocational engineering, DTNA. “From the cab to the frame rails, to powertrain and battery configurations, we examined all features to deliver weight savings to our customers for greater productivity and profitability.”

The 47X is approximately 200 lbs. lighter than the 49X in like-for-like spec and is best for weight-sensitive applications like mixers and bulk haul. All X-Series trucks have tougher, yet lighter, single-channel frame rail options versus legacy products. The platform offers frame rails with best-in-class RBM (resisting bending moment) of up to 3.8 million inch-lbs. to last longer and return greater payload. A new 9.5-millimeter single channel rail option is available and features comparable strength as today’s 11-millimeter rail. Standard high-strength aluminum forward, rear and end-of-frame crossmembers further reduce mass, as does a new two-battery option.