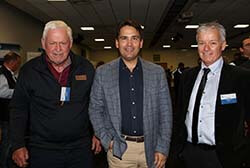 A Focus On Tackling The Big Issues And Building Resilience At The National Road Carriers AGM
Posted: 22-Jun-2022 |

It’s been an eventful year for National Road Carriers (NRC) with significant changes to the structure of the organisation with experienced industry insider James Smith leading the organisation as Chief Operating Officer while the search was underway for a new CEO. Friday night’s AGM provided a great opportunity for newly announced CEO, Justin Tighe-Umbers, to meet with members ahead of his official 15 August start date.

“Feedback from members in the recent survey was clear, they expect us to have a single-minded focus on the issues that keep them up at night,” says John Baillie, Chair. “The list is long and includes rising costs of fuel and labour, roading and infrastructure failure, shortage of skilled workers, compliance, climate change, the pandemic and supply chain crisis.”

“Advocating for members on these issues is our top priority. Making sure NRC is equipped to do this moving forward has been central to how we have shaped the new business and communications strategy. It is why we seconded experts to the Board and partnered with the Hon Simon Bridges to Chair the newly formed Transport and Logistics Advisory Group,” adds John.

The AGM was well supported with 185 attendees taking the opportunity to gain more insight into the new strategic direction the organisation is taking. As part of the new strategy Simon took the opportunity to speak to members about leaning into what the industry is going to be facing over the next few years and issued a challenge to NRC members to focus on the ‘big issues’.

“I want to challenge the industry to focus in on the big issues affecting the industry such as talent, poor roading, low infrastructure investment and climate change. Taking solutions to decision-makers needs to be a priority and doing so in a collaborative way to ensure positive outcomes is important,” says Simon. “The National Land Transport Fund (NLTF) is funded by road users and gets billions into its kitty every year, and if well invested consistently over time would significantly improve roading. But even a cursory glance shows the fund is not being well spent.

“Compounding this, the fund was originally intended to improve roading, but it is now going towards public transport subsidies and rail – with the predictable outcome of repeated under-investment leading to more roading in disrepair and an increase in road accidents.”

Simon talked to members about the other issues such as the shortage of labour and talent. While this is an example of an issue that is being felt internationally and across sectors New Zealand has particular factors that are making it more painful such as unnecessary Government regulation, Covid rules, and restrictive travel and immigration settings – addressing these issues must be a priority for NRC and its members.

Members attending the AGM also had an opportunity to listen to Lance Burdett who spent 22 years as a police officer, becoming New Zealand’s lead crisis negotiator after training with the elite tactical units of Police, Corrections, Fire, Military, and the FBI.

While Simon encouraged members to think big on the industry issues, Lance’s advice was focused on the everyday challenges business owners face. Life is full of small stuff, at home and at work, and his advice is if we regularly tackle the small stuff this will help us build up to, and manage, the big stuff. With the industry undergoing unprecedented transformational change its understandable members feel overwhelmed or even threatened by both the nature and volume of the changes proposed. Many feel like their businesses, and their livelihoods, are under siege as they struggle with rising costs, inflation, talent shortages and a battle to reduce carbon emissions. Lance focused on how members can move into a mindset of thinking about these challenges as an opportunity rather than a threat.

“Building personal resilience needs to be a focus for business owners, acquiring tools to help manage workplace stress and burnout are critical for managing the stress we experience through work, family or from situations we believe are beyond our control. I talk about using positive psychology to improve emotional intelligence with a focus on wellbeing through resilience, optimism, and creativity,” says Lance. “Becoming more mindful, or having an awareness of the present moment, can be a way of reducing stress and increasing wellbeing.”

Following the successful AGM, the Board for 2022/2023 is John Baillie, Ian Newey, Don Wilson, Calven Bonney, Steve Doughty, Corey Burnett, Glen MacKay, along with new Board Member Pamela Bonney, and Shafraz Khan who continues in his role providing specialist strategic support. The Chair and Deputy Chair will be announced following the first Board meeting post-AGM and these details will be shared with members accordingly.