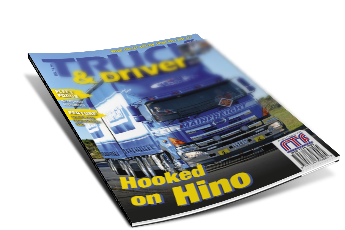 We haven't even started our trip before driver Aman Preet makes it clear that he's got a bit of a soft spot for Hino's 700 Series flagship model.

To the point where he actually waxes lyrical about it: "I've seen fire in the mountains, snow on the ground, black ice and floods in a Hino."

Sounds like Aman and Hinos have been through thick and thin then. To hell and back….well, almost.

What he's talking about, mostly at least, is the year-plus when truckies on the run that Aman's about to begin...

New Freightliner era not far away
The leadup to next February's launch of the new Freightliner Cascadia in New Zealand and Australia has been ramped-up, with the first public unveiling of the big-selling American conventional.

ORS review flying under the radar


As the New Zealand Transport Agency's regulatory catchup work rolls on – after a decade of inattention and under-resourcing – transport operators are having to deal with the day-to-d...


Earthmoving companies. They have trucks, sure,but normally just as a backup to the big yellow machines, right?
Normally, yeah. But down in Christchurch there's a mob that has Earthmov...

Four hundred trucks were registered for the month in the overall market (trucks with a GVM of 4.5 tonne...


Some fleet colour schemes come fully-formed and ready to go, from a professional design consultancy – while others are the result of several years of experimentation.
This mont...

A game-changing industry resource has been unveiled at the Brisbane Truck Show, the product of a strong collaboration between PACCAR...

Freightliner has revealed a new-look Digital Dashboard for its Cascadia conventional truck at the Brisbane Truck Show. Cascadia will be...

Fair Pay Agreements not that fair

In Wellington it’s termed the “Friday dump”, when the Government puts out a press release it doesn’t want too much...

After five years of preparation in New Zealand and more than three million kilometres of road testing internationally, FUSO is...

Mercedes-Benz Trucks has announced the extension of the Active Brake Assist 5 advanced safety package to cover its entire Australian...

The Maritime Union says the Government’s announcement of major investment in rail is a positive move, and is urging more...

Don Wilson - A lifetime in livestock

What with increased compliance demands, driver shortages and angry bulls, the livestock industry is hard enough at the best of...

Scheduled to be released in Japan in mid-2022, the Hino Dutro Z EV is Hino Motors Ltd’s first full-scale electric...

Scania New Zealand say they are pleased to announce the addition of four new managers to its high performing sales...