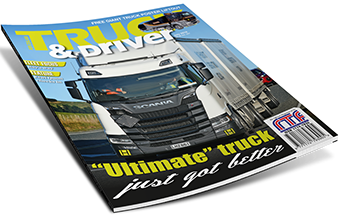 Career Truckie Reg McCorkindale has reached retirement age...and then some. But even though he's already notched-up around half a century behind truck steering wheels, the Dunedin driver's very happy to keep going "for a while yet."

That's no big surprise when you meet Reg and his new truck - which he rates the best he's ever driven. And that's saying something when you consider that his last three were all 730-horsepower Scanias!

It rates as even higher praise when...

Freightliner Goes Electric
IN A MOVE SEEN AS A FIGHTBACK AGAINST ELECTRIC truck startups like Tesla, Nikola and Thor, Daimler Trucks North America has unveiled a heavy-duty Freightliner Cascadia etruck. The fu...

Mode neutrality goes out the window


THIS GOVERNMENT, AS SOON AS IT WAS elected, promised to be a government of change. Following a fairly slow first few months, we are now beginning to see what it meant by that – and for the...


If Kevin McKay was a bullshit artist, he'd tell you he knew it from the start. He'd reckon that his decision to quit his owner/driver contract – carting containers and bulk liquid tankers ...


The New Zealand new truck market returned to its record-breaking form in April –rebounding after its months-long streak of new monthly alltime bests cameto an end in March.


It's a livery that keeps company branding to a bare minimum: No big, bold logo on the roof aerofoil. Ditto for the stock crates.

And yet in the area that G.K. Skou Transport concentrates ...

Cost of living and inflation pressures are mounting

The cost of living and inflation are going up and this is creating a lot of pressure for everybody. With...

Safer speeds for Northland and north Auckland - have your say

People living in Northland and north Auckland are being encouraged to give their feedback on proposed safer speeds at schools...

Takitimu North Link project begins this weekend as construction gets underway on the first of eight bridges to be built.

On Friday 20 May, Waka Kotahi joined our partners Hōkai Nuku to bless the Arawhiti ki Ōkahu viaduct and artworks...

New Zealand is a step closer to a more resilient, competitive, and sustainable coastal shipping sector following the selection of...

A collaboration between some of the country’s leading manufacturing and transport companies will mean hundreds of plastic truck mudguards will...

Chair Lachie Johnstone has announced the CentrePort Board has appointed acting CEO Anthony Delaney as permanent Chief Executive Officer, with...